See the Seldom Scene in a Bluegrass Stories Video Podcast

A newly-discovered video of the Seldom Scene from 1984 features interviews with band members John Duffey, Mike Aldridge, Ben Eldridge, Tom Gray and Phil Rosenthal mixed with songs performed by the band on stage at the Birchmere in Arlington, VA.  It was produced in 1984 for George Mason University television by professor Mike Kelley, who was also an occasional Bluegrass Country on-air host.  A tape of the show was found in Katy Daley’s attic – she conducted the interviews – and she’s made it available to view on the Bluegrass Stories podcast.  It’s a rare up-close look at an influential bluegrass band in its prime.

Bluegrass Stories is a podcast hosted by former WAMU and Bluegrass Country host and program director Katy Daley and Howard Parker. Along with mandolinist Akira Otsuka, they started the podcast in April 2019 as a way of getting behind the scenes in the bluegrass business. They’ve interviewed musicians, instrument builders and dealers, promoters, educators, broadcasters – anyone with a good story to share.

The Bluegrass Stories podcast is available now on Apple, Google, Facebook, Soundcast and at katydaley.com, where you can watch the Seldom Scene video and listen to all of the previous podcasts. 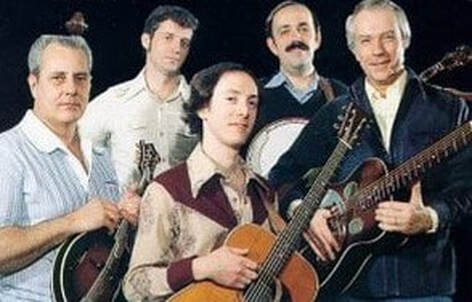