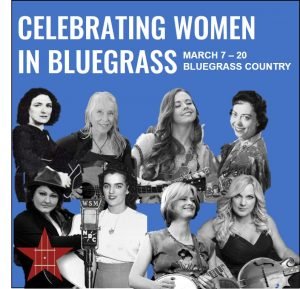 For a long time, bluegrass music seemed like a man’s world.  There were some notable exceptions:  Sara and Maybelle Carter were country music pioneers, Rose Maddox and the Stoneman sisters were stars in the early days,  Sally Ann Forrester was part of Bill Monroe’s Bluegrass Boys (playing accordion!) when Earl Scruggs made his famous Grand Ole Opry debut with the band that many consider the birth of bluegrass.

But for most of the early days of bluegrass, if you saw a woman on stage she was likely in the background, playing bass and maybe singing on a song or two, introduced as “our pretty little girl singer” or something like that.

There isn’t a clear line of demarcation that shows when women performers became prominent in bluegrass.  And even if it didn’t show to the outside world, music has always tended to be inclusive, regarding instrumental chops and clear vocals as more important than gender.  But today’s bluegrass is more open and inclusive than ever.

Last year’s IBMA awards, the top prize, Entertainer of the Year, went to all-female band Sister Sadie.  They also won Vocal Group of the Year for the second year in a row.  Women artists and bandleaders regularly win in all categories (except Male Vocalist, of course).  The latest list of top 30 songs in the Bluegrass Unlimited National Bluegrass Survey includes two each by Becky Buller and Lorraine Jordan, plus Missy Armstrong, Alicia Nugent, Dale Ann Bradley, Tina Adair, Sara Jarosz, Kristy Cox and Rhonda Vincent, plus six other bands in which a woman is a featured performer.

There’s a long list of women who were bluegrass pathfinders, and a longer list of women who are important artists in today’s music.   In recognition of their contributions, Bluegrass Country is putting the spotlight on women in bluegrass during its spring 2021 membership drive, March 7 through 20.

We’ll be featuring songs that feature woman performers, not just in bluegrass but in old time, Americana and other roots music that’s part of the Bluegrass Country mix.  And we’ll be asking for your support, letting you know how you can be part of our mission to take America’s music to the world.

Women in bluegrass from the Bluegrass Country video vault

Bluegrass Country has one of the finest selections of bluegrass videos on the web, with great performances from some of the best woman artists around.  From March 7-20 we’ll feature a new video every day.  Check it out!