Tuesday, December 8 has been called the 75th birthday of bluegrass music.

To be precise, it’s the 75th anniversary of the evening when Earl Scruggs played the Grand Old Opry for the first time as a member of Bill Monroe’s Blue Grass Boys.  That show, on December 8, 1945, introduced what was to become the accepted bluegrass instrumental mix, adding a banjo played in a three-finger roll style to the fiddle, mandolin, guitar and bass.  It was new and exciting, string band music with overtones of blues, swing and gospel, played with drive and authority.

Bill Monroe would certainly have debated that the 1945 show was the origin of bluegrass.  The words ORIGINAL BLUE GRASS MUSIC SINCE 1927 were famously painted on Bill’s mandolin case, dating back to the start of the Monroe Brothers.  Bill Monroe and the Blue Grass Boys first appeared on the Opry in 1939, tearing up the house with an up-tempo version of “Muleskinner Blues,” and they were one of the most popular acts on the Nashville show.  But after Earl Scruggs joined the band, it really took off.  Other string bands were playing music that was similar, and many of them quickly began to copy what they heard from the Monroe band.  And after a while, people began to call this new-sounding music “bluegrass.”

Was Bill Monroe the father of bluegrass?  Opinions vary.  Read the comments from this post on Bluegrass Today.

Seventy-five years later, the form endures with only slight modifications.  The Dobro, or resophonic guitar, became a core bluegrass instrument in the 50s, further cementing the connection between bluegrass and blues.  A few bands include drums, or an electric bass.  But the basics of today’s bluegrass, with verse-chorus singing, three-part harmonies and solos on acoustic instruments, would be familiar to the listeners who heard it for the first time on radio station WSM that night in 1949.

Bluegrass Country will celebrate the first 75 years of bluegrass music this month with special programming.  We’ll be talking about what makes bluegrass unique and special, how it developed from mountain musical traditions and incorporated urban influences, how it’s kept up with the times without losing its soul.   And we’ll be playing songs from the last seven and a half decades.  It all happens the last week in December.  Don’t miss it! 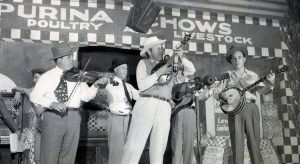 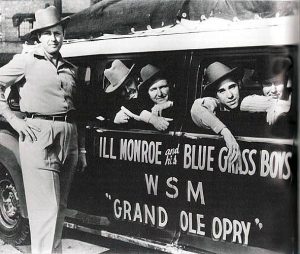 Listen to a song from the band’s first recording session, September 1946.