In “Richmond,” songwriter John Lowell of Livingston, VT paints a portrait of a man who longs to get back home from out west.  There’s a foreboding of tragedy, as he’s writing his mother in Richmond just before riding out with General Custer.  The song is the first prize winner in the 2021 Hazel Dickens Songwriting Contest from the DC Bluegrass Union.

All three of this year’s top songs deal with timeless themes of loneliness and loss.  Second place goes to “If They Could Put That in a Bottle,” an inventive barroom lament by Dan Whitener of Matawan, NJ.   The third place winner is “If I’d Only Tried” by Bill McKay of Laramie, WY.

The Hazel Dickens Songwriting Contest is an annual competition named in honor of the late singer/songwriter Hazel Dickens.  A product of the West Virginia coal country, Dickens moved to Baltimore, MD, as a young woman to find factory work. She started performing throughout the Baltimore/Washington region and was soon recognized for her singular mountain singing style and her gift with a lyric.

Dickens wrote of coal miners, unionization, hard times, feminism and much more.  She recoded for Rounder, and won an IBMA Distinguished Achievement Award in 1993.

Judges for this year’s contest were Alice Gerrard, Joe Newberry and Peter Rowan.   They also selected three songs for honorable mention: “Keep the River on Your Right” by Kristen Grainger of Salem, OR; “Jesus the Refugee” by Kevin Slick of Louisville, CO, and “Chicken Wing Song” by Buddy Guido of Mohawk, NY.

Read more about the contest and listen to the winning songs at dcbu.org.

All proceeds from the Hazel Dickens Song Contest help fund the DCBU, a nonprofit all-volunteer organization with a mission to promote bluegrass music in the greater Washington region through education and performance. 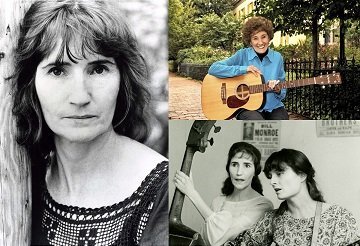