Lee Michael Demsey, host of the Lee Michael Demsey Show and Open Mic on Bluegrass Country, was honored by the International Bluegrass Music Association (IBMA) on September 30 with the presentation of a 2021 Distinguished Achievement Award.

IBMA’s prestigious industry award is given annually to honor individuals and organizations in bluegrass music “who have proven to be forerunners in their particular field of endeavor and have fostered bluegrass music’s image with developments that will broaden the music’s recognition and accessibility.”

The award was presented in a ceremony at the IBMA World of Bluegrass business conference in Raleigh, NC.  Dudley Connell, lead singer and guitarist for the Seldom Scene, made the presentation, citing Demsey for his 39-year career as a bluegrass music broadcaster (over 11,000 shows!) and 31 years as compiler of the monthly Bluegrass Unlimited top 30 national survey of bluegrass songs. 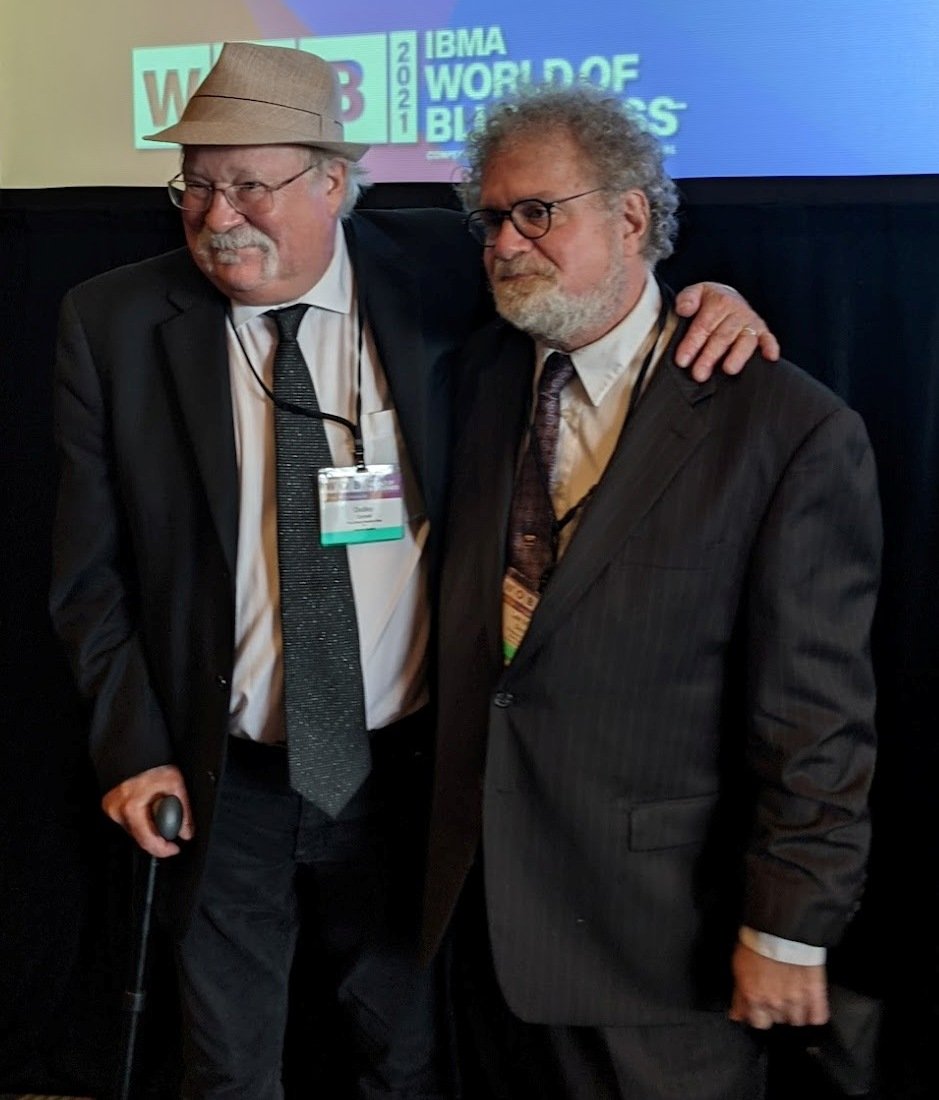 “I’ve been proud to wave the flag for contemporary bluegrass, keeping it fresh,” he told the audience,  “and grateful to IBMA for giving me these career-spanning bookends of acknowledgements –  Broadcaster of the Year in 1991, the second year of the award, and now 30 years later the Distinguished Achievement Award.”

Lee Michael Demsey is a veteran of Bluegrass Country radio, and one of the most popular and knowledgeable radio hosts in the business.  The California native started as an engineer at WAMU-FM in Washington, DC when he was a senior at The American University, and joined the staff as host of “Rock ‘n Roll Jukebox” in 1975.  It quickly became WAMU’s second most popular show, after Saturday Morning Bluegrass.

In 1983, as WAMU was expanding its bluegrass programming, Demsey began hosting the early afternoon show Capital Bluegrass, which was later renamed The Lee Michael Demsey Show.   In 1991 he was the IBMA Broadcaster of the Year.

For many years on WAMU and Bluegrass Country, the Lee Michael Demsey Show was heard every weekday.  A couple of years ago he cut back, and today he hosts a 3-hour show on Saturday morning, playing his signature mix of contemporary and classic bluegrass songs.  Demsey also hosts the weekly show Open Mic, featuring recordings of live performances.

In May 1990, Demsey originated a monthly top 30 bluegrass song survey, which is published in Bluegrass Unlimited Magazine and broadcast during the Lee Michael Demsey Show.  It’s still going strong after more than 30 years, and more than 50 radio hosts contribute to the survey, from broadcast, satellite and internet stations in the US, Canada and Australia.

Away from the microphone, Demsey spent several years working for Smithsonian Folkways Recordings, where he produced and compiled two volumes of Classic Bluegrass released in 2002 and 2005.