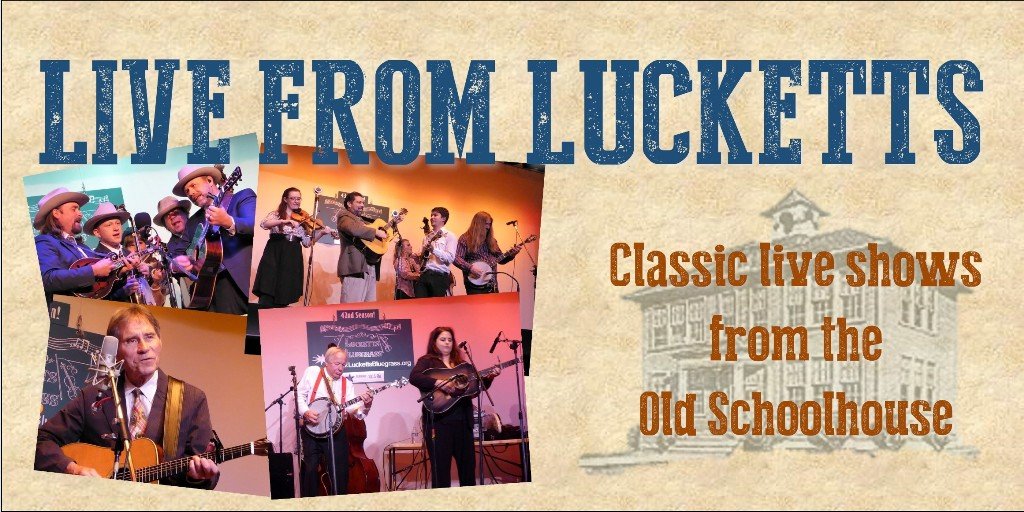 For the last 47 years, the little community of Lucketts, Virginia has hosted Saturday night bluegrass music concerts at a historic former schoolhouse.  In fact, the Lucketts Bluegrass Series has been called “the Grand Ole Opry of Bluegrass Music.”

The tradition continues every Saturday night October through April, as nationally known bluegrass acts play to enthusiastic crowds in the 225-seat venue.  Last year’s concert series was cut short by the Covid pandemic, but the shows will start up again as soon as restrictions are lifted.

Now listeners can relive some of those musical evenings, as Bluegrass Country radio broadcasts concerts recorded live at Lucketts every Saturday night at 8, hosted by Jeff Ludin.

Bringing music to the old Lucketts Schoolhouse was the brainchild of local musician E.J. Spence, who thought a music hall would be a great alternative to the bars that hosted most bluegrass shows in the 70s.  He and some friends organized the shows, kept the building in shape and began to build a reputation as a family-friendly place to hear great music.

Over the years, the reputation grew, and today Lucketts is a mecca for bluegrass bands and fans.  The building has been restored, by the Saturday night shows are still organized and run by volunteers, under the auspices of the nonprofit Lucketts Bluegrass Foundation.

“We’re thrilled to be able to air these live performances from one of the oldest and most fabled bluegrass venues in the country,” said Teskey, program director of Bluegrass Country.  “We’re pleased to be working closely with the Lucketts Bluegrass Foundation to make these broadcasts possible.”

The Lucketts Foundation is equally excited. “We’ve been presenting bluegrass shows for more than 45 years,” said foundation board member Karen Capell. “COVID-19 has caused us to go dark temporarily so broadcasting past performances on Bluegrass Country is a great opportunity to share the music.”

For more information on Lucketts Bluegrass, go to luckettsbluegrass.org.