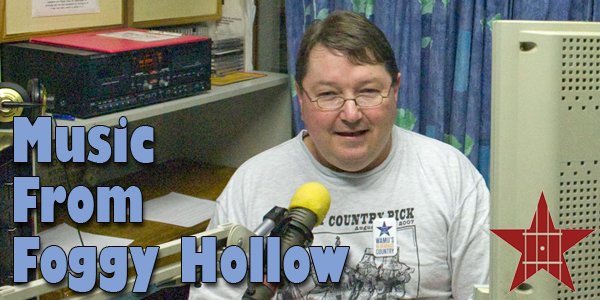 
Mike Kear is the International Bluegrass Music Association (IBMA) 2020 Broadcaster of the Year.

On Music from Foggy Hollow, the new releases bluegrass show, Mike plays the latest bluegrass, newgrass and acoustic country music from Australia and around the world. He usually features a new album each week, playing 4 – 8 tracks off the album during the show and often having live interviews with bluegrass personalities or artists.  He also opens the vaults to play some selections from the show five years before.

Mike Kear is a New Zealander, living in Australia for the last 27 years. He first heard bluegrass in 1968 when the great NZ band Hamilton County Bluegrass Band had their weekly prime time TV show in that country. He was immediately hooked on the excitement in the music and never stopped loving it. After moving to Australia, he joined the bluegrass society there, and soon found his way into a band, singing lead and playing rhythm guitar. One of the thrills for Mike at that time was to be singing alongside his teenage son Hamish, who used to come into the band from time to time to add harmonies, and to be the “sex symbol” of the band. Mike’s other son, Alistair is a superb guitar player and bass player, but sadly prefers Metallica and a mosh pit to Dan Paisley and a bluegrass festival stage.

Mike’s approach to the show is simple and direct:  “There’s nothing too serious,  the show’s only for fun, and it wont hurt you a bit.    So join me wont you?”

You can read more about Mike and the show, including playlists and some of his trademark humor, at atalkingdog.com.

Mike welcomes emails about the show at foggyhollow@bluegrass.org.au.

In 1970, Mike Kear went to a music festival in Hamilton, New Zealand, looking for a Woodstock-like experience.  What he got instead was Bill Clifton singing “Little Whitewashed Chimney” and a taste for the high-energy music called bluegrass.  An article in Bluegrass Today describes his bluegrass epiphany.  Mike hosts the weekly Music from Foggy Hollow show, broadcast in Australia heard Sundays and Tuesdays on Bluegrass Country.