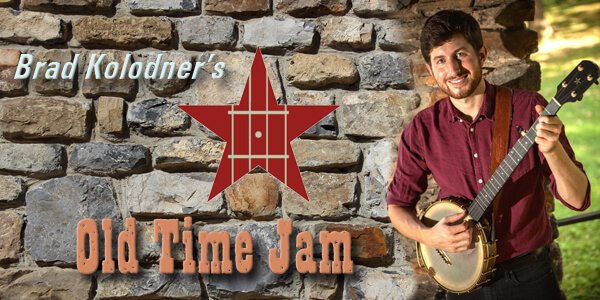 
The Old Time Jam is your one-stop shop for the latest in discovering today’s vibrant, diverse and ever-growing Old Time music landscape. Join banjoist and radio host Brad Kolodner on a weekly sonic journey through the hollers of Appalachia to the big cities across America and far-distant lands beyond. Where there’s Old Time music in the world, you’ll find Brad digging up the latest records to share with you. From up-and-coming stringbands to the storied legends of this classic American style of music, the program features the finest new releases keeping this rich musical style alive and pushing the boundaries of the tradition. Tune in to the Old Time Jam every Friday from 12-3 pm eastern time on Bluegrass Country Radio!

Started in the early 00’s by Hubie King, The Old Time Jam remains one of the few weekly radio programs dedicated solely to Old Time stringband music. Following Hubie’s departure as host, Rosemarie Nielsen took the reins of the program for a number of years before passing the torch to Brad in 2017.

Brad Kolodner is a renowned clawhammer banjo player and broadcaster living in his hometown of Baltimore, Maryland. Ever since he was a little kid listening to Baltimore Orioles baseball games on the radio every night, he has had a lifelong passion for broadcasting and storytelling. Brad graduated from Ithaca College in 2012 with a degree in Television/Radio where he hosted a folk show on WICB called “The Hobo’s Lullaby.” He signed on with WAMU’s Bluegrass Country in 2013, rapidly learning the ropes and gaining a reputation for his adept interviewing skills, clever playlist curation and playful storytelling. He was awarded an IBMA Award in 2016 for Industry Involvement and in 2019, he became the youngest person nominated as IBMA Broadcaster of the Year. He is an avid promoter and ambassador for Old Time, Bluegrass and American roots music.  In 2021, he was elected to the IBMA Board of Directors, representing broadcast media.

Outside of radio, Brad tours throughout the region in a duet with his father Ken Kolodner, an acclaimed hammered dulcimer player and Old Time fiddler. They have recorded four albums together including their latest record Stony Run which hit #4 on the Billboard Bluegrass charts in March 2020. He is also a founding member of the acoustic roots music quartet Charm City Junction, a stringband fusing Irish, Old Time and Bluegrass music. Charm City Junction was a 2016 IBMA Momentum Band of the Year Nominee.

Brad also hosts the Brad Kolodner Show, bringing you progressive bluegrass on Wednesday at noon and Saturday at 7 am.  For Brad’s tour schedule and latest albums, visit www.bradkolodner.com

Brad Kolodner Elected to IBMA Board